Our family likes making food, no doubt but we also like to garden. When our Zia (Aunt in english) pulled this zucchini out of the garden it was the size of my sister’s leg! 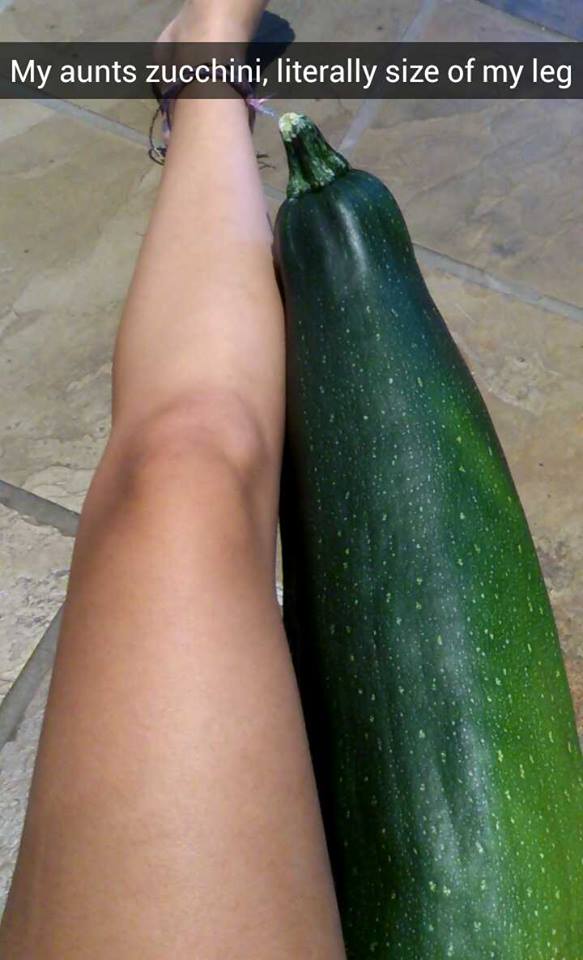 And because bananas are a standard scale on the internet: 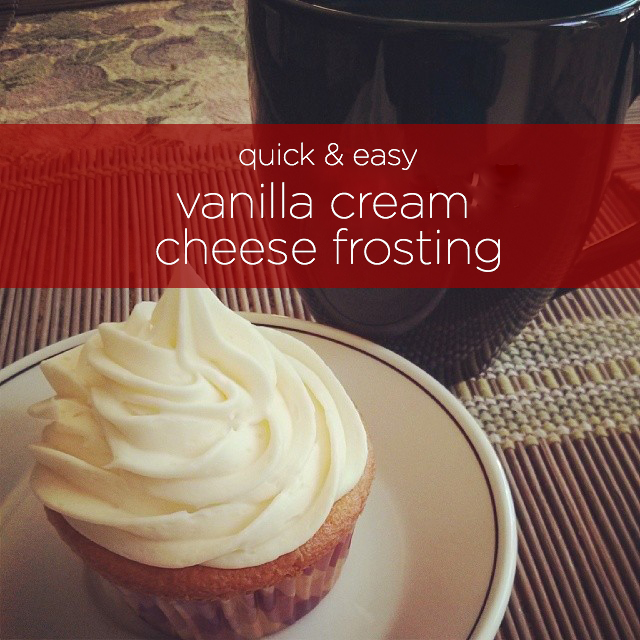 My sister makes these amazing cupcakes and frosts them with Vanilla Cream Cheese Frosting. The best part is the frosting so here is the recipe. Enjoy!

My sister doesn’t like risotto, but she loves my tomato risotto. She even rated it a 10 out of 10 and she can be a tough cookie when rating my food. I warn you though, this recipe is about patience and being in three places at once.

1.  Prepare the rice.  Heat the oil in a large frying pan, add the rice and stir well to coat the grains in the oil.  Bring the stock to a boil and add 1 ladleful of it at a time to the rice, stirring well after each addition, until the liquid has been cooked but still al dente.  This will take about 15 to 18 minutes.
2.  Prepare the tomatoes.  As you prepare the risotto, heat the butter in a small saucepan, add the tomatoes and gently cook for about 10 minutes until soft.  Pass through a mouli or coarse sieve; alternatively mash with a potato masher.
3.  Finish the dish.  When the rice is cooked, fold in the mascarpone, Parmesan and the tomato mixtures, adjust the seasoning and serve.

I love this recipe because it simply requires two ingredients!

Recipe by: Gimme Some Oven

How do you coat perfectly round truffles with melted chocolate. Preferably with the least amount of mess. Normally, I just dip the truffle into a bowl of melted chocolate and remove the truffle with a spoon. I then will place them on a sheet of wax paper.

However, this leaves my truffles looking …well not so round. The chocolate drips down causing the truffle to have a flat surface. And the ball is not smooth.

The recipe I am following can be found here and an example is shown below:

I don’t know about perfectly round, but you can do better.

Stick toothpicks in the truffles before dipping. Dip them using the toothpick, let it drip enough to make sure there’s not a ton of excess, probably while spinning it a bit to let it cool slightly and make sure it doesn’t all accumulate in one place. Then stab the other end of the toothpick into something to hold it with the truffle at the top. (A block of foam works, as does cardboard, though you might need to pre-poke holes.)

This avoids having a lot of excess coating chocolate, which it looks like you’re getting a lot of when scooping out with a spoon. There can still be a little excess, but it’ll drip down the toothpick, not get smeared all over. It also avoids having to mess up any of the surface by touching it with the spoon.

Beyond that, they’ll be as perfectly round as you managed to roll the centers, which is mostly just a matter of a bit of practice and obsessiveness. So they won’t be perfectly round, but they’ll be a lot smoother and rounder, definitely enough to impress people. You do get a small hole on one side of the truffle, possibly with a tiny bit of excess chocolate around it where it collected against the toothpick, but I don’t think that’s terribly ugly. Plus as long as a decent fraction are pretty, you can just eat your mistakes.

Here’s what a friend and I managed on our first try:

As you can see, they’re definitely not perfect. But we got better at it as we went along. A lot of the irregularities are from initial inexperience, variation in chocolate temperature (we didn’t have a great water bath or hot plate setup), and simply not having terribly round centers.

Finally, you might want to practice tempering the chocolate a bit better. Having nice glossy smooth surface makes them look a lot cleaner even if they aren’t perfect.

Source: I asked this question on cooking.stackexchange.com

I made this recipe awhile ago so be aware that my experience is a bit forgotten. Nonetheless, I really love this recipe for its unique aroma and taste. The smell of basil makes this recipe an absolute favourite. More importantly it is a great vegetarian option!

Preheat oven to 400 f.Cut the tomatoes in half horizontally. Scoop out the flesh using a spoon. Dab the tomato cavities dry (See pictures above). In a bowl, mix together all other ingredients except tomatoes, bread crumbs and butter/olive oil.  Spoon this mixture into each tomato half. Top with bread crumbs (approximately 1 tbsp breadcrumbs per tomato half). Gently pat the bread crumbs down. Drizzle a little butter or olive oil on top of the stuffed tomatoes.

Place stuffed tomatoes in a buttered or oiled baking dish. Bake for 15-20 minutes. Then turn the oven to broil and broil till the tops are golden, about 1 minute.

I learned a few tips making this recipe:

It took three attempts to get this recipe right. A few tips I learned along the way:

The pattern is unique, but the taste is not much different than regular boiled eggs. This might be due to the absence of Chinese five spice powder which I did not use.

My Zia (aunt) baked this amazing cake for easter and I really wanted to share the recipe!

1. Bake your favorite cake recipe for a two-layer, 8″ or 9″ cake. (For this cake, I used Duncan Hines yellow cake mix.) Make sure to even out your layers so there’s some room left at the top for your coconut.

2. Frost with your favorite icing. (For this cake, I used Duncan Hines chocolate icing.)

3. Press the Kit Kat bars around the cake gently.

4. Place the coconut in a zippered plastic bag. Add drops of green coloring (I used 4) and close the bag. Shake until the color blends evenly. Add more coloring if necessary.

5. Sprinkle the coconut over the top of the cake. Add the mini eggs.

6. Tie a ribbon around the Kit Kat bars.

I made this dessert for a company dinner and it was a favourite among the group. As a relatively simple dessert that requires few ingredients I suggest it for any small to medium sized get together. For larger groups this dessert cannot feed more than 7 people.

The hardest part is thinly slicing 3 apples (a sharp knife helps – thanks Mr. Wong!). Also, I used too much sugar so be careful not to overdue it. Lastly, serve warm and with ice cream!

1.Heat the oven to 200˚C/Gas 6. Roll out the puff pastry thinly on a lightly floured surface to a 2mm thickness. Using a 13cm plate or saucer as a guide, cut out 4 rounds and place on two large baking sheets. Prick the pastry all over with a fork to stop it puffing up.

3.Arrange the apple slices in a circle on top of the pastry discs, overlapping them slightly, placing 2 rings in the middle to finish. Brush them with melted butter and sprinkle with a fine layer of caster sugar.

4.Bake the tarts for 10 -15 minutes until the pastry is cooked. Dust with icing sugar and glaze with a blow torch.

5.Serve the tarts warm, with a scoop of caramel ice cream.

There was an error retrieving images from Instagram. An attempt will be remade in a few minutes.